The history of scheduled service bus travel probably goes back centuries, depending upon one’s interpretation of the word “bus.” Essentially any vehicle that could transport groups over the land might be considered a bus, but the first “modern” interpretation would probably be the “charabanc.”

According to the Encyclopedia Britannica, this vehicle originated in France: “Charabanc, (from French char à bancs: “wagon with benches”), long, four-wheeled carriage with several rows of forward-facing seats, originated in France in the early 19th century. It was pulled by up to six horses and was used by private owners to convey guests on excursions. It was soon adopted in England, where two horses were used. As afterward modified in England for public transport, it was entered from the rear and had five or more rows of seats. Today, sight-seeing motor coaches in Great Britain are sometimes called charabancs.”

In the beginning, some charabancs had awning-like covers but were usually open-sided giving little protection from bad weather. They were also not too comfortable with their board seats that may or may not have had any padding at all. The ride was also rough due to the primitive or nonexistent suspension systems and poor roads of the times. As a result, charabancs were used more often for short excursions, less for longer trips.

As charabancs evolved, a large folding hood was developed, usually made of canvas, that was only installed if the weather turned bad, similar to today’s convertible. Some of these hoods had drop-down side panels that were much more protection for riders during wet weather.

And Then Came the War

Although motorized charabancs were catching on, World War I was a catalyst as soldiers became used to motorized vehicles during their time in the service. When they came home, innovators among them took advantage of Army surplus vehicle sales to improve on the charabanc of the late teens, according to an article in the ClassicCars.com Journal.

In relating the end of the war to the “leisure motoring” that ensued, Angels Willis, curator of the museum’s [England’s famed National Motor Museum at Beaulieu] Caravan Club Collection, explained, “As the war ended, those that returned home often did so with new ambitions and a bonus in their back pocket. Many were introduced to motor vehicles on the battlefield, and some were inspired to put their new-found skills to good use in peacetime.

“Ex-war vehicles and surplus parts were sold off by the government at knock-down prices. These became the building blocks of charabancs and trailer caravans, fulfilling the demand for leisure journeys into the next decade.” 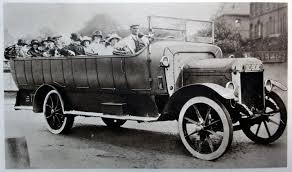 One British company, Royal Blue Coach Services, was founded in 1880 with horse-drawn vehicles but by 1926 had 72 motorcoaches in operation.

On the other side of the pond, in Owosso, Michigan, Wayne and Cora Taylor saw the mass transportation writing on the wall and founded Phillips-Taylor Livery Service. The company specialized in moving passengers and freight from the local Durand Union Train Depot to points around Shiawassee County. True pioneers in their field, the Taylors built some of their first autobuses. By the mid-teens, they had expanded their service to Flint and became known as the Owosso-Flint Bus Line.

As the automotive industry in Flint and Saginaw expanded, so too did the needs of the communities for reliable public transportation. Indian Trails answered that need and at the beginning of World War I, the company was serving passengers all the way from Saginaw and Bay City to Flint and Detroit.

During the war years, Wayne Taylor served in the Army Signal Corp and fought in France. Meanwhile, back in Michigan, Cora ran the show and out of necessity and possibly genuine desire, she became the first women in the United States to be issued a chauffer’s license. In recognition of her many accomplishments, Cora's portrait hangs today in the Hall of Honor at the Michigan Department of Transportation.

It wasn’t until the mid-1930s that the company incorporated as Indian Trails, about the same time the Federal Highway Act gave control of U.S. bus operations to the Interstate Commerce Division. As the oldest family-owned scheduled service bus firm in the state, Indian Trails is itself the history of scheduled service bus travel in the U.S. and remains at the forefront of the industry today.

Unlike the charabancs of a century ago, which were inclined to overturn due to their high centers of gravity but offered no protection when such accidents occurred, today's motor coaches are the safest buses ever on the road. They also have amenities never even imagined by Cora and Wayne Taylor — GPS and Wi-Fi, climate control, and recharging outlets, to name a few — and are constructed to meet the needs of people with a range of disabilities. Moreover, Indian Trails' motorcoaches are among the most environmentally sound equipment in transportation. Here are some facts from the American Bus Association from 2014:

Throughout its more than 108-year history, Indian Trails has exemplified what a great scheduled service bus company can be. From the last century to the next, Indian Trails intends to remain among the best.