Ever wondered what a day in the life of a professional charter bus driver is like? The guys and gals who take on professional charter bus driving jobs are quite gifted. It's a job that requires a blend of driving skills, mechanical skills, and people skills. We spoke with driver Becky Smith, who has been a driver with us for over 15 years, to find out why she loved her job as a bus driver and why she equally loves her new position as Safety and Driver Education Manager at Indian Trails! 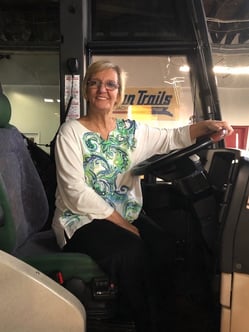 When did you begin driving for Indian Trails?

Becky Smith: I came to Indian Trails in February of 2003. I wasn't quite sure if this is what I wanted to do, but I thought I would try it out. I fell in love with it.

When you have a charter trip ahead of you, what do you do to prepare for that trip?

Becky: There's two different kinds of charters. One is a day trip. For that I would come in and get an itinerary, and they would give me a charter order. It tells me when I'm supposed to be here. Then I would look up the addresses and find maps and stuff of where I'm going if I hadn't been there before. I pay careful attention to the times that I'm supposed to be places. I look at the charter order to make sure that everything is going to work. If I'm going to do a multi-day, then I have to prepare more, packing enough clothes, finding out what my bump point is going to be. That's when they send you out ahead, and they have another driver bring you the group. For that I need supplies. I want to make sure that I have enough stuff to be able to clean the bus and take care of people in a reasonable manner.

What is an average day like when you're on the road with a charter?

Becky: An average day for just a day trip would be really early usually. We start about four o'clock in the morning to maybe make our time of arrival six o'clock to where the group is going to get us. Then we put them on the bus, and we drive them to where they're going. Some day trips are multiple locations, and other day trips are just like they're going to Cedar Point for the day. The typical thing would be to drive them where they were going and wait with them. It depends on the group and what they're doing. Most of it is repetition. You'll go to Cedar Point quite a bit. You'll get to go to Michigan Adventure quite a bit. We do a lot of scientific museums and things like that.

What's the most memorable thing that has ever happened while you were driving?

Becky: There's two that come to mind. They both involved the Mormon Tabernacle Choir whom we transport on their tours when they come and do the eastern tours. The one was we took them to the inauguration this last time for President Trump. It was the most memorable thing, I think, I've ever done, was to be actually out back of the capital. Being part of all the security, being part of that whole process was about the coolest thing, I think, I've ever done. The other one involved them too. We were taking them out down by a river. They were going to be singing down there for one of their recordings. As we were coming out, I looked in the rear view mirror, the side mirrors there. We were serpentining through the wheat fields. It was cool, 11 buses all serpentining. It was like wow, I wish somebody would have filmed this. Other than that we've gone great places with them, to Boston, to Nashville. I've been in some auditoriums listening to them. They're probably one of my most memorable groups.

What part of the job is most fun for you?

Becky: I like the driving. That's why I'm a driver. I like the driving. I like going to all these different places. I go to Washington DC, New York, Florida. I've been all the way out to Utah. We did the whole trip out and back to Salt Lake City. Boston. Upper Michigan. I take school groups up to St. Ignace. I've been on the island. I've been everywhere. Since my husband doesn't like to travel, it's been wonderful, and all of that is paid for.

Becky: It's hard work, but it's rewarding. I don't think we can emphasize enough that it's hard work. People think that all we do is sit behind a wheel. It's exhausting to drive a bus. If you're paying attention to all the traffic and all the things that you have to do, the safety of everyone, it's a hard job. It's also one of the most rewarding ones. I've been here 15 years, and I have loved every minute of it. Not one day have I gotten up and felt like I was going to work.