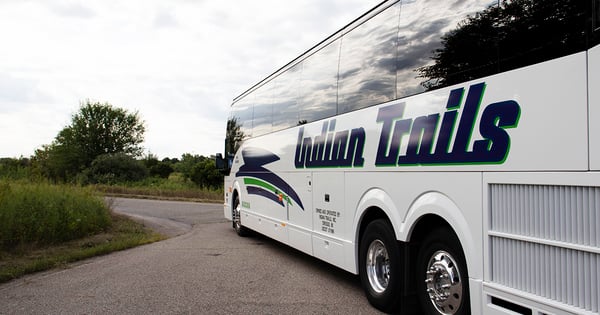 Bob Davis, aka “Bus Driver Bob,” came to Indian Trails after being in the role of a stay at home Dad for eight years. Once his kids were old enough to be in school, he and his wife decided it would be a good time for him to get out of the house and start working again. But Bob was concerned with how much time he would have with his family after starting to work for Indian Trails. Those concerns quickly diminished after starting his career as a bus driver.

When you first start driving for Indian Trails, you may not have a set, consistent schedule. But all the drivers have realized, if you give it time, you will find yourself moving up the seniority list and getting the opportunity to have a more consistent schedule and route.

Driving a large motorcoach isn’t for everyone, and to some it can look scary or stressful. We asked the drivers how they dealt with these concerns. Kris Daggett, a newer driver, shared “It’s the least stressful job I’ve ever had, and probably the most enjoyable.” Coming from a high pressure job in logistics, driving a bus is fun for Kris.

If you are still experiencing stress over this kind of work, our drivers had some advice to help you feel more comfortable. John Kelley, a four-year veteran driver, recognizes the importance of relaxing. He says, “You’re driving a large vehicle, with up to 56 people on board, and you should just relax. You’re gonna make mistakes, but don’t dwell on those mistakes and go with the flow.” The Indian Trails team of trainers, drivers and dispatch personnel are all there to set you up for success as a driver.

New to the Industry

Many of the drivers that come to Indian Trails aren’t familiar with the travel and tourism industry. John Kelley and Matt Dickinson had previously been in careers as truck drivers; working with people (instead of freight) was something they had to get used to.

Then there are drivers from other industries, such as logistics, manufacturing and even school- bus driving, that are still unsure about what to expect as an Indian Trails motorcoach operator. You aren’t alone in being nervous to make a big career switch. Our drivers think you’ll find guidance from the family at Indian Trails. Matt Dickinson, a driver since March of 2017, says this about his decision to become a motorcoach operator, “I’m happy with how it’s gone; I have no regrets. This is definitely a career for myself and it can be a career for anyone else out there that wants to do it.”

Starting a new job is one of the top 10 most stressful life events (ThriveGlobal). Bus Driver Bob said it all when he explained how the onboarding process at Indian Trails works: “If you’re coming in to Indian Trails, it’s likely going to be intimidating at first. It’s a lot to learn, it’s a lot to process and it’s a lot of information all at the same time. But just go through the training, give yourself time to adjust to it, and adjust to driving on the road. Ask the questions you need to ask to the drivers, the dispatchers, the mechanics… this could be the most rewarding career choice you’ve ever made.” 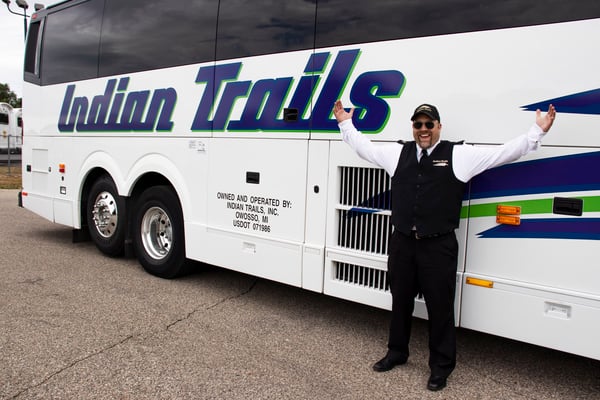 We hope hearing from some of our own bus drivers helps clear the air on any hesitations you have about becoming an Indian Trails bus driver. If you’re interested in applying, visit our employment page here. As always, we promise to help you along the way with any questions you may have. Happy Trails!