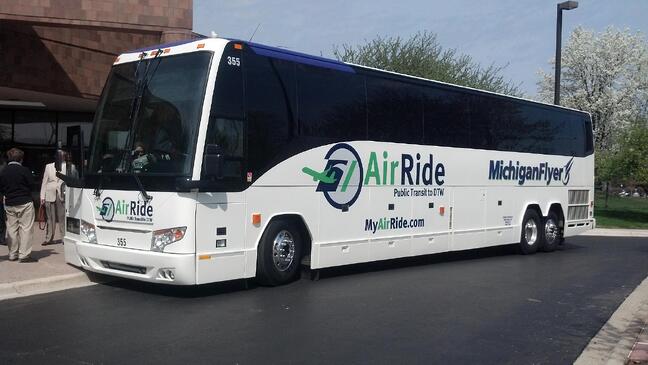 When you think about it, an airport is a lot like a city, with many of the same concerns and priorities a city has: sanitation, utilities, land usage, public safety, and—possibly the most challenging of all—transportation.  After all, an airport spans literally thousands of acres of land occupied by terminals, runways, hangars, parking lots, and other facilities—plus countless venues for eating, shopping, socializing, personal care (massage, anyone?), and even prayer.  With an estimated 1.7 million passengers flying in and out of U.S. airports every day—under the constraints of rigid departure times and exacting security procedures—airports must make liberal use of moving sidewalks, shuttle buses, mobile lounges, and automated people movers to get passengers to their far-flung terminals, concourses, and gates all day every day.

But before all those people can get around the airport, they first have to get to the airport.

How do you get to the airport?

Considering what we know about traffic congestion, fuel prices, parking hassles, and carbon emissions, it’s not surprising that travelers want other options for getting to the airport.  Across the country, airport authorities—in cooperation with public transit systems, scheduled buses, and private rideshare or charter operators—are responding with airport transportation options in every price range.

For decades, air travelers in Europe and Asia have been able to hop on public transportation to get from city centers to the airport or from the airport to city centers.  Several U.S. cities have taken a cue from their international peers and extended their rapid transit lines to area airports—with onsite stations within walking or shuttle distance to departure gates. The Transportation Research Board ranked 27 airports with rail link systems, on the basis of market share and overall success of the system.

A few of the services the study identified as “best practices”:

In the world of airport transportation, scheduled bus service refers to a dedicated bus that shuttles passengers between a local airport and one or more regional destinations along a fixed route.  These airport shuttles are typically operated by private companies licensed by a regional department of transportation or airport authority.  They are cost effective (anywhere from $8 to $30 per one way, flat-rate ticket) and reliable.  Passengers can enjoy the deluxe amenities that come with luxury motorcoaches:  WiFi, 110V outlets, DVD players, and reclining seats with individual climate and light controls, overhead racks, and room to stow luggage.  Typically, scheduled buses drop off and pick up passengers at a designated spot at the airport.

Top performing operators from three U.S. regions (based on criteria established by the Transportation Research Board—including frequency of service, pick-up and drop-off locations, and the availability of express or semi-express service):

Michigan Flyer-AirRide is a public-private partnership between a private motorcoach company, Indian Trails, and the Ann Arbor Transportation Authority (“TheRide”), offering 12 daily round trips between East Lansing, Ann Arbor, and Detroit Metropolitan Airport and one daily trip between Ann Arbor and DTW.

Shared-ride vans and charter buses offer pre-arranged door-to-door ground transportation service for a set price (either a per-passenger price or a flat rate for the vehicle).  The most common shared-ride vehicle is an eight-passenger van, but transportation companies also use SUVs, station wagons, executive limousines, and motorcoaches.  Typically door-to-door, shared-ride vans and charter buses are pricier than the other options (somewhere between the cost of public transportation and a private taxi cab) but can be surprisingly affordable if you have a large group.  This is the transportation of choice for conference planners, executives, and special event coordinators who want to oversee all the travel details and transport their people in style.  This is the airport transportation mode you might select if you were entertaining out-of-town guests for a wedding, or hosting visiting executives for a factory tour.

Next time you’re planning airport transportation for yourself or a group, consider one of the many options—public transit, scheduled buses, or shared rides—for getting from here to there.